I'm pleased to be speaking about "The Many Deaths of Tom Thomson" at Toronto's Marina Del Rey Residences Book Club. The club is associated with the Humber Bay branch of the Toronto Public Library.

Posted by Gregory Klages at 7:42 AM No comments:

I'm pleased to be speaking about "The Many Deaths of Tom Thomson" at the Swansea Historical Society, Wed., Feb. 6 at 7:30 p.m.

http://swanseahistoricalsociety.ca/
Posted by Gregory Klages at 7:44 AM No comments:

Gregory Klages, author of "The Many Deaths of Tom Thomson" is featured in a new 1-hour radio documentary exploring sense-making about the Canadian painter, Tom Thomson. The program first aired on the Canadian Broadcasting Corporation in November 2018.

Posted by Gregory Klages at 7:50 AM No comments:

I'm pleased to be speaking about "The Many Deaths of Tom Thomson" at the Royal City Men's Club, Guelph, ON on November 15, 2018.

Posted by Gregory Klages at 7:46 AM No comments:

In August (2018), podcaster Toronto Mike and I sat down to spend some time discussing some of the many popular myths, errors, and gossip that have muddled talk about painter Tom Thomson's death.

Topics touched on include:
- the 'fishing line' story,
- the 'fight' story,
- the birth of the murder theory, and
- tales of Thomson having been in a relationship with Winnifred Trainor.

You can listen here: http://www.torontomike.com/2018/08/toronto_miked_podcast_episode_364.html

Posted by Gregory Klages at 7:45 AM No comments:

In-depth interview on 'Murder Was The Case' Podcast 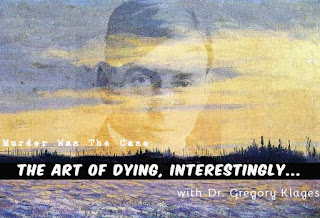 Murder Was the Case: Episode #34:
'The Art of Dying, Interestingly...'
With @GregoryKlages, historian & author of 'The Many Deaths of Tom Thomson.'

Posted by Gregory Klages at 12:16 PM No comments:

How did David Silcox get Tom Thomson's death so wrong? 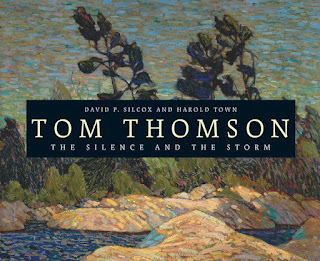 The Errors and the Flaws:
How did David Silcox get Tom Thomson’s death so wrong?

In 2017, HarperCollins released a thirtieth anniversary revised edition of David Silcox and Harold Town’s Tom Thomson: The Silence and the Storm. The book offers an abundance of attractive reproductions of Thomson’s art. The text, however, suffers from disappointing and surprising factual errors about Tom Thomson's death.

In the 1970s, Silcox (art critic and former Canada Council Arts Officer), and abstract painter Harold Town collaborated on the book, Tom Thomson: The Silence and the Storm. The work valourized Thomson, describing him as an inventor, innovator, and possible precursor of Canadian abstract painting. The book also rejected recent conspiracy theories about Thomson’s death, such as proposals Thomson had been murdered or committed suicide. In The Silence & the Storm, Silcox and Town indicated support for the official cause of death listed in 1917, that Thomson had died by accident. Silcox and Town offered that Thomson had fallen out of his canoe due to a sprained ankle. This theory had only been offered publicly once before, but seemed to explain a facet of the story depended on by murder theorists - that Thomson’s body was found with fishing line wrapped around one ankle (the fishing line worked as an ankle splint or brace, Silcox & Town claimed).

As Town died in 1990, Silcox edited the 2017 volume. Silcox repeats the ‘sprained ankle’ claim in his 2002 book, Tom Thomson: An Introduction to His Life and Art, and again in the 2017 republication of The Silence and The Storm. In the recent work, however, he attempts to buttress his claim with what might appear to the casual reader as convincing evidence. On pg. 49, he states:

“[Thomson’s] feet weren’t tangled in wire, as has been repeatedly suggested, because [Mark] Robinson noted at the time the body was recovered that Thomson had carefully bound copper fishing line around a sprained ankle to give it support."

This sentence offers two easily demonstrated errors about the facts of Thomson’s death.

1) In 1917, Mark Robinson did not record fishing line on Thomson’s corpse.

Mark Robinson, the eyewitness Silcox refers to in the quote above, was the Algonquin Park Ranger who led the search for Thomson, and who on 17 July 1917 was one of two persons who made notes about the condition in which Thomson’s corpse was found.

Robinson’s notes make no mention about Thomson’s corpse having fishing line around one ankle (see his diary entry here, on the website I helped produce in 2008, Death On A Painted Lake: The Tom Thomson Tragedy).

As I’ve explored at length in another post, Robinson first introduced his ‘fishing line’ tale in the 1930s, and expanded on it in the 1950s. As testimony, it is untrustworthy; it is uncorroborated by observations from any other observer (including the doctor who examined Thomson's corpse on 17 July 1917), and was first mentioned over a decade after the events in question (not to mention that Robinson changed the details between his 1930s and 1950s accounts). Additionally, if anywhere near true, the presence of fishing line around Thomson’s leg can easily be explained as the line that was used to drag Thomson’s corpse to shore.

2) Mark Robinson never mentioned anything about Thomson having an ankle sprain.

For anyone familiar with Robinson’s diary entries from July 1917, or the other accounts that Robinson produced in the 1930s and 1950s, Silcox’s claim about Thomson having a sprained ankle is incomprehensible.

Not only did Mark Robinson not record any mention of fishing line in 1917, he never – not once, in the multiple accounts he produced over 35 years – mentioned Thomson having a sprained ankle. The claim is simply not true. (Read some of his post-1917 accounts here and here, on the Death On A Painted Lake: The Tom Thomson Tragedy website.)

Where did the sprained ankle story come from, if not Mark Robinson in 1917?


As I detail in Chapter 8 of The Many Deaths of Tom Thomson, Silcox and Town’s original statement about the sprained ankle was based on testimony offered long after Thomson’s death. The first record we have of the ‘sprained ankle’ story appeared in 1969, not 1917. It was then that Tom Thomson’s nephew, George Jr., suggested to an Owen Sound newspaper a claim he said he had heard from his father; George Sr. had been told (not witnessed) that Tom had a sprained ankle in 1917. George Sr. never mentioned this claim in any surviving documents he produced (such as letters to researcher Blodwen Davies), and no one else – including eyewitnesses to Thomson’s last days – ever produced any corroborating claim.

In 1973, Elva Henry, another relative of Tom’s, repeated George Jr.’s sprained ankle claim to a researcher working for Silcox and Town (see excerpts from the interview notes here, on the Death On A Painted Lake: The Tom Thomson Tragedy site).

In 1977, Silcox and Town offer the sprained ankle story as the most likely explanation for Thomson’s death, but don’t identify on what basis they arrived at this conclusion. Given that the story had only surfaced in the preceding decade, without any corroborating primary sources or witness accounts, their silence about the source of the story makes sense.


Silcox’s 2017 claim clearly shows a lack of attention to the evidence about Thomson’s death, and introduces two more errors into narratives of Tom Thomson’s demise.

How, in the process of editing The Silence and The Storm for republication, David Silcox could choose to offer new claims about Thomson’s death without at least checking them against easily available evidence (or even other secondary accounts) is baffling.

Although republication of The Silence and The Storm was likely intended to establish the book as a paragon of Canadian art historical writing, the revised edition undermines the credibility of the work. It is a visually attractive book, no doubt. That Silcox could misrepresent the facts of Thomson’s death so wildly certainly diminishes the impression that the visually attractive republication might otherwise make.

Posted by Gregory Klages at 9:22 AM No comments:

"Many Deaths.." included in Writers' Trust of Canada, Best Books of 2016